for more information go to AWARS

Romero Motos are the perfect example of passion for the world of motorbikes. The history of its founders goes back to the Fifties when Jesus Romero formed part of the staff of Bultaco, together with his brother Pedro. He worked in the Catalonian factory in the department of research and racing, immersed in the world of new prototypes and the test-bench, calculating, trying out new solutions, checking the resistances of the materiales, tuning the engines: immersed in the very origens of the motor-bike.

Working in Bultaco was not merely accidental, but the result of his juvenile ambitions. Jesús remembers the first light motorbikes he saw, Velosolex, Derbi "paleta"(so nicknamed because manual labourers used them) as he called them, those machines from his childhood, which would mark out the path he was to follow.

In the Bultaco factory he learned all about the "entrails" of the motorbike. " There I learnt what a bike is all about" says Jesús. "On the test-bench everything was very easy, trying out the engines, getting their maximum potential, observing the torque graph and seeing how long they lasted". But not only did he limit himself to research tasks, but also wished to grasp the handlebars and race, a wish which he did acheive but which finally caused him quite a few head-aches. 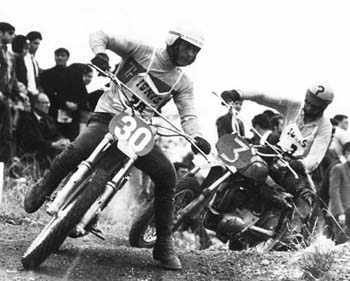 A stroke of bad luck

"There were five apprentices in Bultaco, and only two were to be promoted and therefore able to race",explains Jesús.

However fate was unkind to this man, and he suffered a serious accident in 1966, while training; this caused him to stop competing for some time. In a jump, he fractured his leg in four places and was on the point of losing it. The company then sent him as Derek Rickman's mechanic to England.

That was the reason for his leaving racing, since from then on, Bultaco offered its bikes to foreign racers. Logically, greatly displeased, he decided to change his allegiance. This change was to Montesa, where he was to continue free-lance, "Not as a company racer", he adds. In fact the only support he received from the company was in spare parts.

In the whole of this process , he was aided by his brother Pedro, who accompanied him as his mechanic. Things, however didn't go as well as expected since his accident, and Jesús decided to leave racing for a time from 1969, "I spent about three years disinterested in bikes".

In this lapse of time this racer-technician-mechanic earned his living driving lorries, a situation against his nature and which couldn't last long. Hence, when some friends opened a mechanical workshop, his colaboration was soon solicited. At first it was just bits and pieces, but little by little , the giant within him began to awake and he soon succumbed to his passion for motor-bikes. 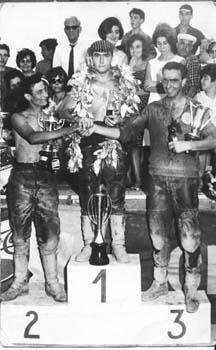 The town of Cardedeu in Barcelona was the spot chosen by our man to come back to life.There he opened a workshop which worked for about two years. Then he went onto the town of Rubí, to an official Bultaco agency and soon after went on to Barcelona.

Finally in 1982, he opened ROMEROMOTOS in the town of Sant Adrià del Besòs,a suburb of the great city of Barcelona.

Under the name of ROMEROMOTOS, he started a small, specific industrial activity, which gave rise to the development of varios types of models, including cross, speed etc. reaching a total of 86 bikes manufactured.

The bikes were retouched and manufactured in the town of Sant Adrià and the engines were assembled and tuned by Jesús himself.

The bikes were really competitive and the proof of it was in the fact that 85 of them were Spanish sub-champions and also world sub-champions with Fernando Gil , racing on an ARM 350 of their own production.

Jesus left that activity and then spent his time repairing all types of european and Japanese models, two and four speed, as well as manufacturing exhaust pipes. He is also an expert technician in repairing and tuning all types of suspensions, Ohlins, White Power, Koni, Betor, Bogere, Marzocchi etc. and worked in the Derbi team of Gianola as suspension technician.

Mechanics have undergone an important qualitative change. They have changed a great deal, although the old ones were good. The new ones are more technical. Before anybody could get a engine going, nowadays they have to be finely tuned; a decimal difference makes you lose potential.For example, the plates have to have a certain flexibility, and the squish has to have certain measurements. The mentality has changed and one has got to be up-to-date with the changes in the bikes.

Fortunately, according to Jesús, the mechanic in our country have adapted perfectly. "There are good profesionals in Spain, I don´t want to leave the world of racing altogether , as this helps me be in good form when I'm working with other bikes."

Jesús is quite happy to tackle any task, it doesn't matter whether it is a cylinder head or the correction of the steering. But there is one type of repair with which he is frequently faced : repairs which others have not been able to do. "For example, in suspensions we find mistakes which others haven´t been able to see, people get flustered and that's why I like to tackle those jobs. I can sense straight away what the matter is".

Apart from his intuition, Jesús uses other "tricks"..." you've got to be very careful with all the preparations". Such is the accuracy of this technician , that he revises everything down to the very last detail. Referring to discoveries, making a complete motorbike is no mean discovery and we refer specifically to the ARM which were of his creation.

Racing is an important feature in the life of Romero Motos.

In the Nineties they played a leading part in the Championship of Spain in 75 cc. with such young racers as David Segura, Enrique Segura, Oscar Vazquez Francisco Tirador and Alvaro Bou.... it was in this competition that Ivan Silva (only 13 years old) was again proclaimed Spanish Champion (1995).

Between 1995 and 1997 they took part in jet-ski trials , winning the recent Aprilia Cup (Spanish Championships), also being involved in technical assistance.

At the beginning of XXI century, they began a new adventure with CEV (Speed championships), participating in the category of 250 cc. with two Honda RS 250 as usual, tuned in their own workshop.

Jesús can feel proud of many things, but he remembers one particular occasion when he discovered an error in a record time. "We had a deal with a brand of oil, and during the race the connecting rods melted, and no mechanical error could be found anywhere, until I eventually discovered the fault was in the oil. I had to work at top speed and without the information which is available nowadays". 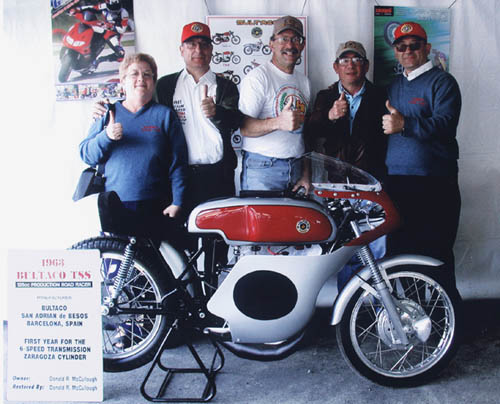 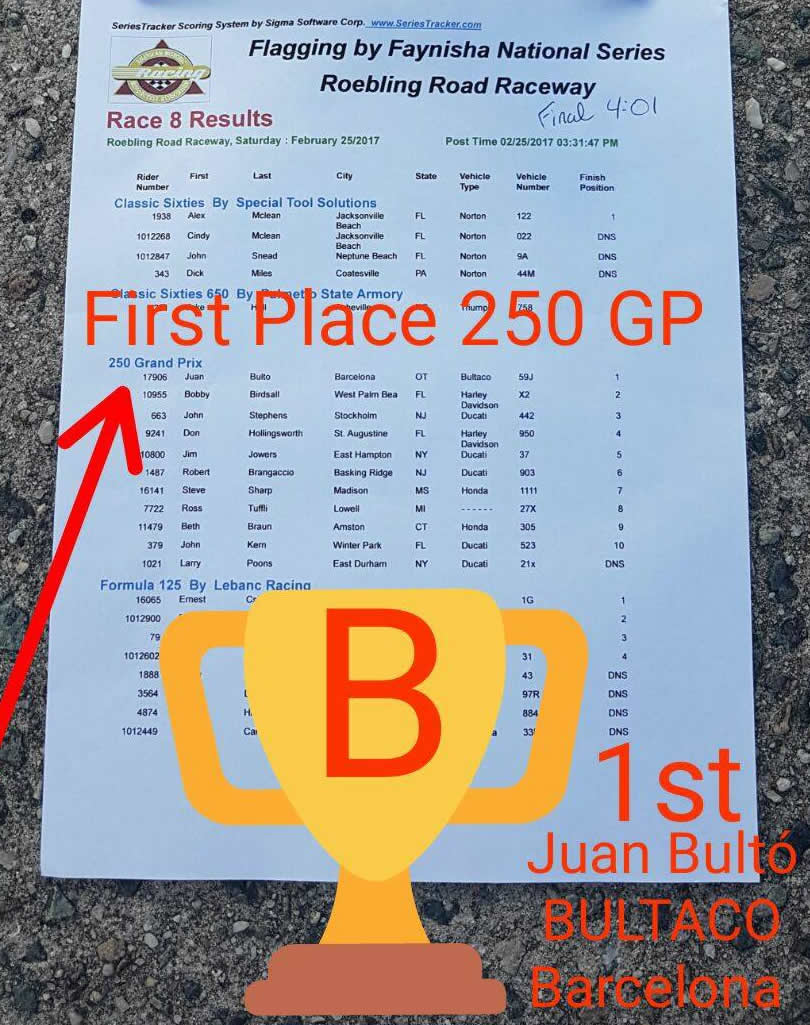 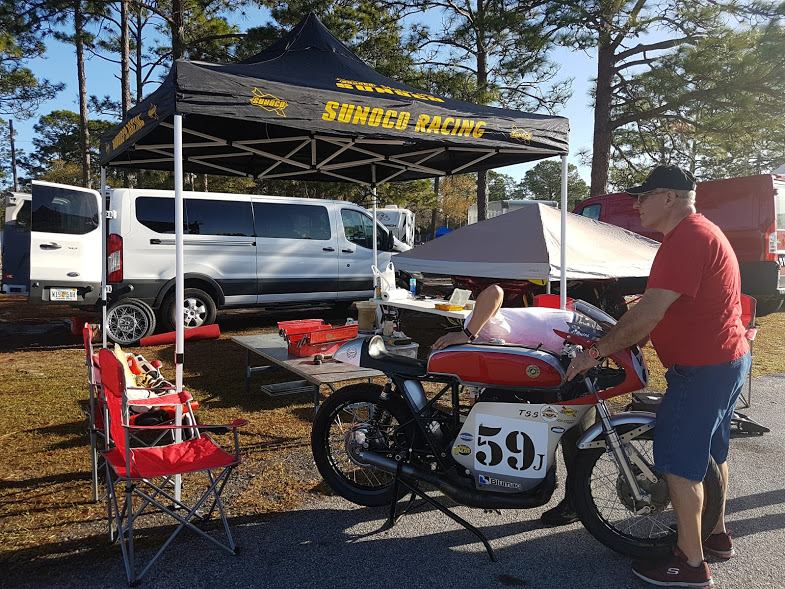